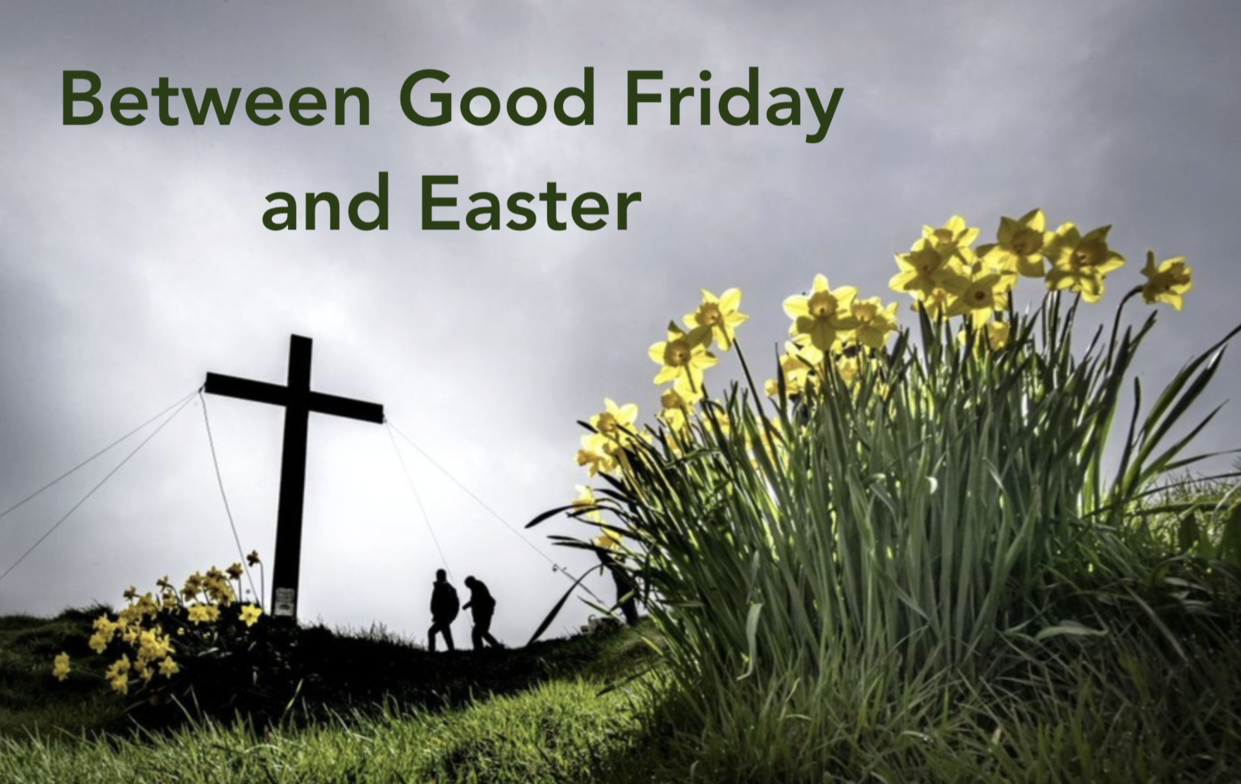 Here at Gloria Dei we are blessed to have our own "theologian in residence" -  Rev. Dr. Larry Denef. Pastor Larry (as we affectionately call him) has served the church as seminary professor, as curriculum editor for Augsburg publishing house, and Executive Director of the Division of Parish Life for the ELCIC - just a few of his many roles.

Our congregation has grown in faith in Jesus Christ because of his ministry. If you spend any time with Pastor Larry, you will soon hear him encourage you about what Christianity and faith is all about - not a dogma or a set of rules, but a relationship with a God who says, “Trust Me!”

As the Church commemorates Holy Week, we are pleased to offer this timely reflection from Pastor Larry on the nature of the Church.

The Church: Living between Good Friday and Easter

The Lutheran confessions define the church by its ministerial function: the gathering of the people, the proclamation of the gospel and the administration of the sacraments. Luther affirms those so-called marks of the church, but he also writes that, “The Christian people are externally recognized the the holy possession of the sacred cross.”

For Luther, the cross is most often designated with something with which it is associated; namely suffering. He often uses the word cross and suffering interchangeably, and in essence sees it as “identical . . . with the cross we are called upon to bear” (Regin Prenter). The Christian people as church, “must endure every misfortune and persecution, all kinds of trial and evil from the devil, the world and the flesh [as the Lord’ Prayer indicates] by inner sadness, timidity, fear, outward poverty, contempt, illness and weakness ,in order to become like their head Christ,” (Luther).

In other words, human suffering is not only a reality in life but necessarily designated as the place in which the church becomes identical with Christ in its midst. “Amid the suffering of the world, the church is there waiting for the Word to be proclaimed and the sacraments to be administered; it is already there hidden or latent as Luther said, waiting to be manifest in the gathering of the people around the Word and sacrament” (Vitor Westhelle). This is the point made by Dietrich Bonhoeffer when he speaks of the cross and suffering in the real world as the historic location of the church as the body of Christ. “Because Christ entered history; the church is therefore his presence in history.”

To be the church is to exist in the crisis of society, to exist at the place of human suffering, the space inhabited by the poor and the marginalized; that is to live in the eschatological place they are in; in the place where one meets one’s end, and simultaneously meets one’s beginning; to life as it were between Good Friday and Easter. Community happens at the very point of crossing. “Crossing is not only struggle but also solidarity. There is not only society, but also community, and community has other bonds besides a common enemy.” It is at this “front line of experience,” that the church becomes a “solidarity of the shaken” (Jan Patocka).

Chaos is the locus of a distinct life that bears the world of humans to a new destiny. It is here one finds oneself at the extreme limit of what has happened and what is to be done. To pass through the crisis is to carry out what has been remembered. In celebrating the Eucharist the church does what it does ”in remembrance of Christ” (1 Cor. 11:24-25), not as a foregone what-has-been, but as that which in the Spirit is awakened in the present.

When in the words of institution we hear the injunction, “Do this in remembrance of me,” it is an aid to memory. By it we pray, “ Remind us of where you are,” and conversely, “Remind us of who we are.” Who we are is not something to be attained but something to be owned from what in memory has been suppressed. To say that the church is the Word existing among us, or as Luther said,” According to his humanity,” is to pronounce that he is there where the unconcealed truth manifests itself. Again, Bonhoeffer’s words are helpful, when he employs Luther’s understanding of ubiquity.  “The doctrine of ubiquity teaches a Christ outside of revelation.” That is , revelation becomes an accident [an attribute not essential to the entity] of a substance already there.” The Christ who exists embodies today in the stuff of this world becomes visible when community happens, when Christ who is already here among us is revealed to us.

Truth has the power of manifesting itself, the power of revelation. But this revelation, as Luther put it eloquently, is hidden in its opposite (abscondita sub contraria specie) and manifested in what is already existing in our midst. It is even more aptly expressed when Luther says “if you want to meet Christ don’t stare at heaven; in the alleys, at your doorstep there you find Christ.” It is there that Christ exists as community. In the words of Bonhoeffer, Christ exist at the centre of our existence “ When he stands on our periphery.” For Luther the cross of Christ was God’s most decisive revelation, an accident by which the love of God was most fully manifested.

What Bonhoeffer says of Christ can also be said of the church; like Christ the church too is “the centre of our existence . . . when Christian piety is displaced to the periphery of our being, “ an d we could add, the periphery of our society and our institutions (including the institutional church). So can what Luther says about Christ, “You must place this existence of Christ which constitutes him as one person with God, far, far beyond created things, as far a God transcends them; and, on the other hand, place it as deep in and near to all created things as God is near them.” The church occurs as event when that which has been rubs up against that which is still to be.